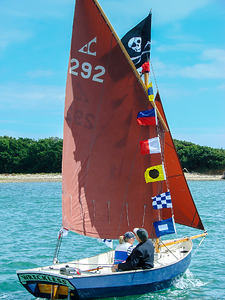 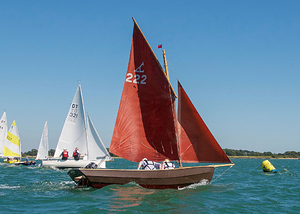 WWSC now has 14 Cobles - possibly the largest fleet in the country. They are great cruising boats and also frequent the Club's One-Tide Cruises but also race at the Club occasionally in Class 2. Indeed a Coble helmed by David Melville almost won the 2019 Higgs Handicap.

Their 16 foot long hull is very stable and has a generous width which makes these boats well-suited to taking a family on a picnic cruise. They have a small outboard mounted in a well in the transom which provides welcome insurance should the wind die. Those who are really keen can even break out the oars with which these boats come equipped.

If you fancy having a go in a Coble, contact Michael Grant (see Directory) who is WWSC's Coble Class Captain.

Below is an award-winning article by Robert Rolls, our 13th and newest WWSC Coble skipper. 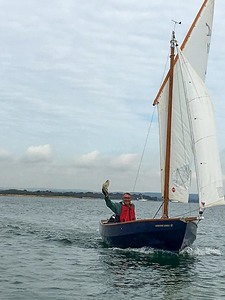 It was not until quite late in the season that I acquired my Coble, and launched her in the Creek at the end of July. 'Three Maids' was made most welcome by other Coblers who hoped nonetheless I was not superstitious as she was the thirteenth member of the fleet.

On a fine August morning I embarked on my first full sea trial, a round trip to Bosham. To add a sense of purpose to the voyage I decided I would show off my new boat to my mother who lives at the end of the School Rythe inlet and do a 'sail past' before heading back. I asked her to take up position on the bench at the far end, gave her the colour of the hull and sail number, and said I would wave and shout once I got close.

I planned to arrive in Bosham at high tide. The conditions were perfect, clear skies, a gentle Force 3 southerly breeze, and an in-coming tide, so perfect in fact that I arrived well ahead of schedule. As I turned into School Rythe off the Bosham Channel I espied a tiny figure sitting on the bench at the far end. I eased the sails and slowly moved past the line of moored boats marking the way in.

At about 100 yards out I started waving and hollering. No reaction from the bench. At 93 years of age my mother's hearing and eyesight were not what they once were so I sailed closer and began the sail past on a reach to give my mother a clear view of the hull and sail number. Two things then happened in quick succession. I ran aground and my mother stood up and waved. As I pushed the boat off the mud, audibly irritated, I remember thinking how lucky my mother is hard of hearing. Still, mission accomplished. Except of course, it wasn't. I had to sail back.

The wind had now picked up to a good Force 4 and was very much on the nose as I began tacking up the Bosham Channel. After about 20 minutes of playing dodgems between at least two lines of moored boats and discovering the Coble did not nip and tack like a Laser, I found myself yet again alongside a boat called Hit and Miss. The wind, and still in-coming tide, were winning the battle so there was no option but to drop the main and motor out of the Bosham Channel. As I set myself to pull the chord on the outboard 'unlucky thirteen' did cross my mind. However, the 3.5hp Evinrude clunked into life first time and we were away.

Once back out in the Chichester Channel I raised the main, and with the tide now with me, swept back up towards East Head all the while practising my tacking technique and discovering what a forgiving and enjoyable boat the Coble is to sail.

With Three Maids back on her mooring in the Creek I looked back down the Channel towards Bosham feeling the whole escapade had taken far longer than it had. It is strange how, when you are busy on the water, time has a habit of standing still.

I phoned my mother that evening who told me she was very pleased to have seen the boat under sail and added: "How clever of you to slow the boat down so I could see the colour of the hull and sail number". "Yes, wasn't it!", I replied.

By the end of the season I had a few more delightful sails under the belt, both single-handed and with the family. My only nagging doubt was the name. 'Three Maids' meant something to the previous owner, but nothing to me. Changing the name of a boat is supposed to be unlucky. However, applying the laws of elementary maths whereby the product of a double negative is a positive, a combination of 'unlucky thirteen' and a 'name change' could only be a plus.

Coble, sail no 81, is now "Three Sheets", which many think far more appropriate, not least my mother.