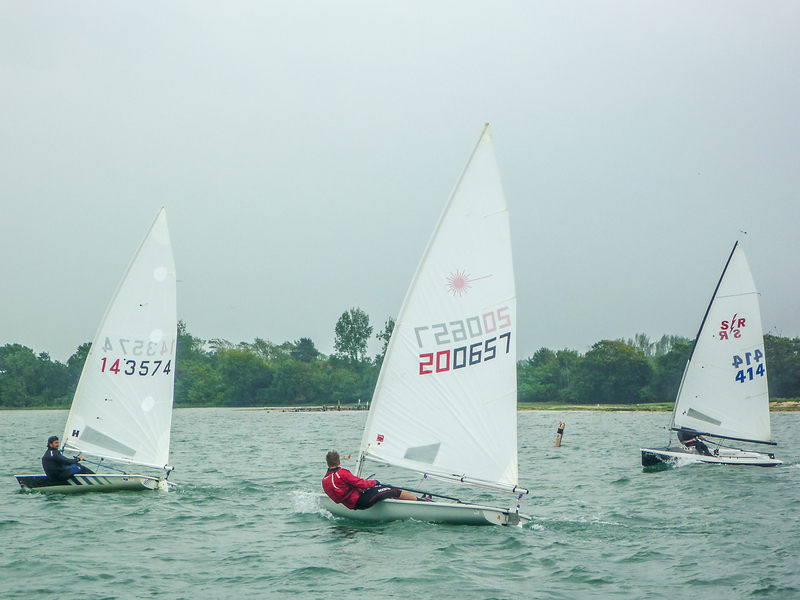 Although we're not yet half way through our season, 2021 has already seen some really excellent racing with particularly strong turnouts from our Laser sailors. This is a brief update. To go to our results site click here and select the fleet and race you're interested in.

After we had to cancel the planned Easter Egg Series due to the Covid rules at the time, our Early Points races for Classes 1 & 2 started on schedule on April 17. During the 8 races (out of a planned 10) that were held Class 1 (Fast) attracted 27 boats. Class 2 (Slow) sailed 7 races and had a more select entry list of 6 Lymington River Scows which made for some really good Class racing.

At the end of the last race on June 13, Class 1 overall winners were Jem & Nancy Western's 2000 followed by Jim Robertson's Laser Standard who just pipped another 2000 sailed by Guy Russell and Clare Collett in 3rd place. Perhaps the Class 2 flag should now change to the "Jolly Roger" with Roger Mavity coming top just 1 point ahead of Roger Bird. Ann Carnegie was 3rd.

The results above are based on the "Low points" scoring system specified in the Club's Sailing Instructions. In this system a boat does equally well whether it comes first in a fleet of 30 boats or just 3. Purely as an experiment we've been finding out how the results change if a boat is rewarded according to the number of other boats they beat - this is called the "High points" system. In Class 1 this approach didn't change the winners but would have resulted in Kevan Watkins Laser Radial moving up from 4th to 2nd. In Class 2 the two Rogers would have been tied in first place with the High points scoring and Nina Haigh would have been 3rd.

The Sprints Series is all about honing your starting and mark rounding technique with 3 short (15-20 minute) races sailed in close succession around the same course. Originally planned as 12 races over 4 days, in the end one day was lost to bad weather so the 16 boats competing this series had a 9 race series. It was notable that 12 of those racing in this series were sailing a Laser (7 Standards, 4 Radials and 1 4.7) - another sign of the strength of this fleet at WWSC. 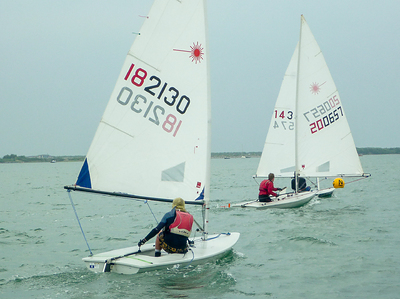 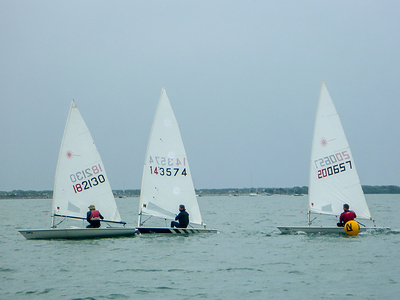 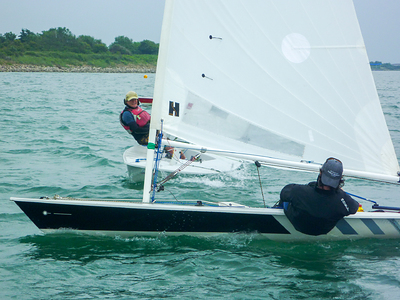 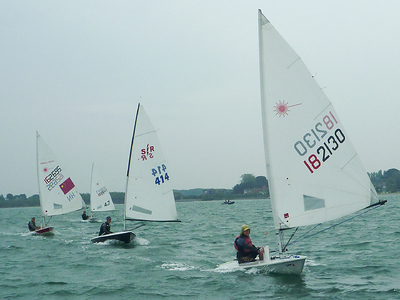 The photos above show some of the close-fought action from the last 3 Sprints where the Laser Standards of Jim Robertson and Karl Snelling enjoyed some really close racing although on a couple of occasions wily Steve Marks sailing a slower Radial managed to get in front!

Until the last day of racing it looked as though Peter McKerchar, sailing his Lightning, would take the Trophy having scored 3 wins and one 2nd in the earlier part of the series. However, he was just overtaken on the last day by newcomer Jim Robertson who by adding a 1st and 2 2nds was 2 points ahead of Peter as the Series concluded. Steve Marks came 3rd with Jolyon Western 4th. 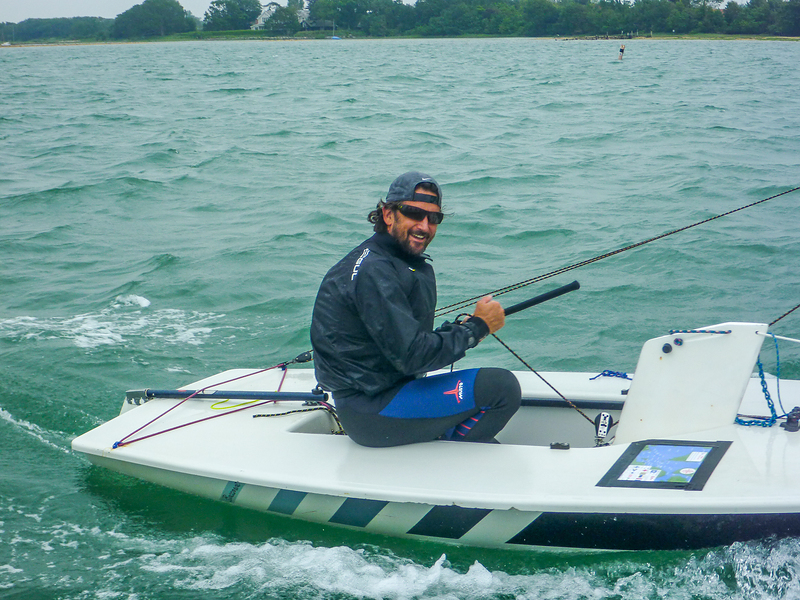 Interestingly, under the "High Points" scoring system (see above) Peter McKerchar would have held onto 1st place by half a point and Steve Marks would have been 2nd with Jim relegated to 3rd place.

A small and select group of 5 Lasers competed in this race, held to raise money for the RNLI. It was run as an "average lap" race around a trapezium shaped course which gave the sailors every point of sailing each lap. After 3 laps Kevan Watkins beat Jolyon Western into 2nd place with a 25 second lead.

Class Racing and the Traditional Trophy (May 30)

Adrian Edwards sailing a Laser Standard took the honours in the Laser Class, Rory Grafton-Grattan in the Toppers, and the Traditional Trophy was won by Sue Marks sailing Caroline Goddard's LR Scow with husband Steve.

12 boats took part in this very informal 2-part race from East Head to Thorney Island SC for a picnic lunch. The overall winner was Ann Carnegie sailing her LR Scow with Sue Marks as crew. Jem and Nancy Western were 2nd in their 2000. 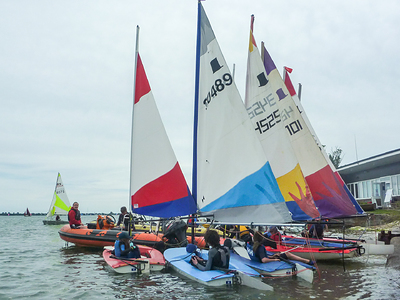 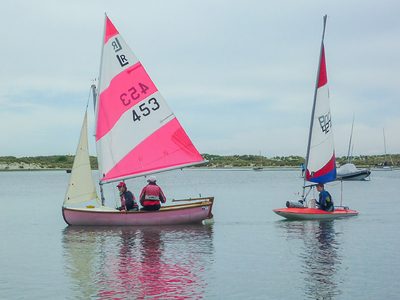 Topper Club sailors at the Thorney picnic and Navigators Trophy winners Ann Carnegie and Sue Marks coast back into the Creek as the wind dies away at the end of the race.

Thanks as always to all those members whose volunteering for our race duty roles makes all this possible. 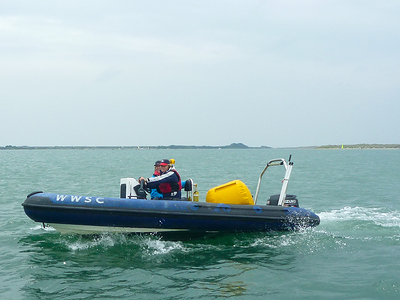 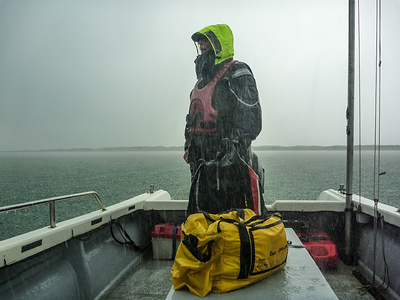 Valerie Hall and Cathy Barrett in "Blue" and Jem Western (RO) caught in torrential rain at the end of the last Sprints race.